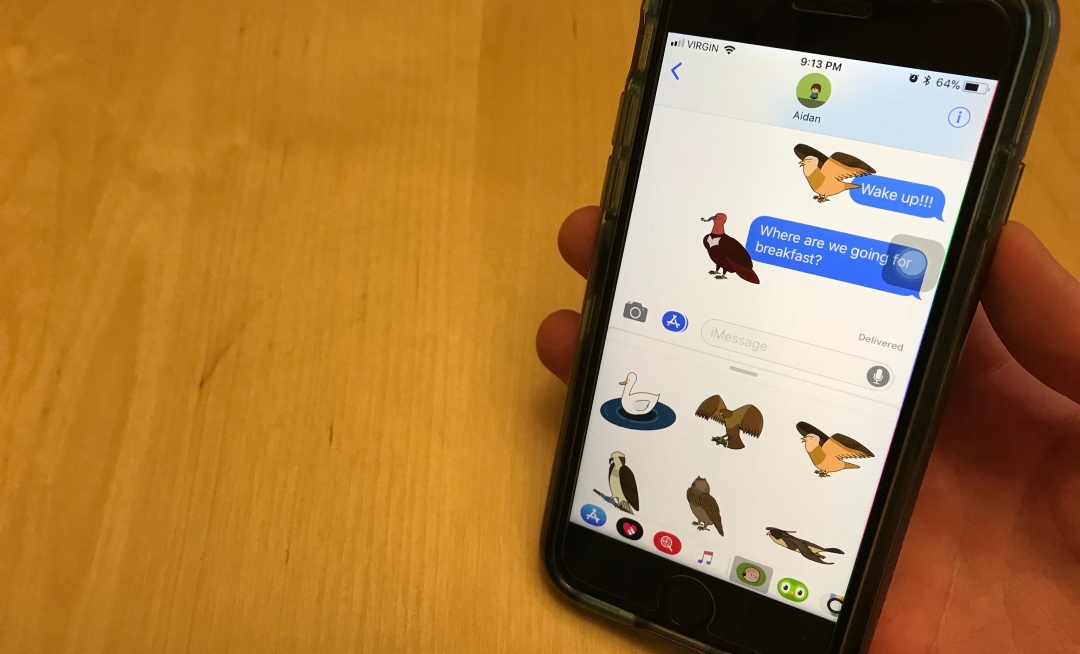 I used to think that designing apps was a job that was both difficult and long, requiring lots of skill and dedication.

And for the most part, it’s true.

However, in the course of my internet surfing, I discovered—serendipitously—a way to make apps without even knowing the word “JavaScript”. Or “C#”. Or “Swift”.

Well, to be clear, it’s not a full blown app. I discovered how to make sticker packs: an app that works within the iMessage framework to add images to chats. And so I made one: Birds of Play—Animated Stickers!

The relative ease with which I managed to make it got me thinking. Why doesn’t Apple broadcast more about the fact that you don’t need to know any code to make a sticker pack? There are tons of artists and animators out there far better than I am who would certainly be able to make cooler sticker packs than I have.

And anyway, as I will detail, the process was really fun.

The birth of the idea

In September 2017, I was busy on lynda.com learning Photoshop to draw the art for my board game.

But I got distracted, and I stumbled upon this course that showed people how to make iMessage apps. And I learnt you don’t need to know code to make a sticker pack.

I immediately decided that I wanted to make one.

And then I forgot about it for six months.

After finishing my board game, I finally began work on the app in February 2018. Apple has reams of helpful documentation on how to make sticker packs, and from the information, I quickly figured out what to do.

There are two main kinds of stickers one can send: the first are still images, that is, JPEGs and PNGs, and the second are animated stickers, like GIFs and APNGs (animated PNGs).

Having an animation background, I decided to make GIFs, which I created during a weeklong school break.

Once I finished the week-long process of making the stickers, I got to Xcode, Apple’s own app design application.

Using it turned out to be the easiest part of the whole process. I literally dragged the files, dropped them into Xcode, and voila! I was done.

Well, there were some hiccups here and there. My first problem was that I had tried to use APNGs, which were HUGE files. Twice or three times the file limit. That made the Xcode simulator freeze up.

After some work, I managed to find an app, Animatrice, that would help me compile GIFs small enough to upload onto Xcode.

And then that was done.

Having my stickers on Xcode and messaging myself in a simulator was all very fun, but I wanted to actually get my app out onto the App Store. To do so, I had to become an Apple Developer.

Apparently you need to be 18 to be a developer. I turned 18 about two weeks before I submitted my app, so that was close. (However, I did manage to mistype my birthday by switching the month and the date the first time, giving myself the three most frustrating days of my life as Apple told me repeatedly that I was too young to be a developer.)

Another problem was submitting the app logo for the store. I was using an image I had created in Harmony and edited in Photoshop, and according to the website, it had alpha channels in it, which were not allowed.

As I said, I’m uninitiated into such processes. I had no clue how to turn off alpha channels. Besides one project in 2016, I did not even know what an alpha channel was.

Thankfully, using Apple’s Preview, I managed export it again, and turn the alpha channels off.

Once I solved that, things went smoothly. There were many steps which, again, Apple covered in their own documentation, and severals forms to fill, but it was quite easy.

Once I got past all that, I submitted it, sat back, and realised that I had school homework to do.

Finally! I had an app on iOS!!

Apple has a review process to prevent people from releasing bug- (or virus-) ridden apps, so I had to wait for them to process my app. It was barely the next day when I was having lunch in school that I received an email telling me that it had been released.

There was a lot of excitement on my part for about ten minutes, and lots of running around, telling my friends to download it.

It was a really surreal experience. But I’m not the sort to message people often, and so I proceeded to forget about it and move on to my next project.

And then I saw this:

That was even more surreal. (Personally, I was wondering if the App Store was lowballing it when it came to finding sticker packs to put on the top charts.)

That was a nice touch to an already great experience for me.

Well, that’s my story, and my first app. Now that I’ve done it, I really think learning code would be a good idea, so that the next time I try and make an app, it’d have more features, which would require some code.

But honestly, if you like art or animation and you can do it fairly well, making a stickers app is a really fun process that doesn’t require too much more time and effort, especially if you already have an idea. Or the art. I’d recommend it.

Oh, you can get my app here for free. I hope you enjoy it as much as I do.