Have you ever heard the phrase, “Success is a journey, not a destination”?

Because if you have, and you agree with it, let me tell you something: it’s one of the stupidest pieces of advice that I’ve heard peddled in the marketplace of ideas. It’s annoying. And false. And before you post an angry comment, here’s why.

Let’s all agree on one thing: that quote is defining success. “The journey, and not the destination.” Why I think it’s stupid, of course, is because it makes success out to be some dreamy sort of thing that every prince and pauper can attain by snapping their fingers. And that’s stupid.

Why? Think about this. Supposing I was traveling from Point A to B. What would success look like in this scenario? Well, obviously, reaching Point B. Now if I went and got lost and then reappeared under a bush at Point M, well, according to our sagely definition above, I’d have succeeded. It was all about the journey anyway, right? Never mind that I missed my plane home, because I did get to see a beautiful bunch of koalas.

I’m sorry if I’m being very antagonistic towards a quote that you might hold dear, but really, it’s the kind of quote you see on Instagram designed for people who could otherwise actually be doing something that would make them successful, but instead are lying on their bums sharing about how “success is a journey”. (Yeah, especially the bits of the journey that involve Instagram.)

So, what do I think success is, then?

Like the dictionary says: the accomplishment of an aim or purpose. And yes, this holds true in our world. The runner up in an election isn’t successful because they didn’t attain the office. The runner up in a race isn’t successful because they didn’t get first place. (Of course, if you were aiming to get second place, that’s an entirely different thing, but let’s be honest: not many aim for second.)

Now don’t get me wrong. I’m not saying that the journey is unimportant, I’m just saying that the journey is not “success”, especially when you’re in the wrong destination. Yes, I agree. The journey is really important. It is, after all, a learning experience, and learning makes us wiser. And yes, in my journey to publishing my two e-books, I learnt much during the process. However, I was only “successful” after I published it, and finished what I had set out to do.

So let’s get things straight. Success can look different for different people, but it only happens when you accomplish your goal. (Whatever that may be.) As useful as the journey is, the means are not the end. You don’t get anywhere with half a wheel, and think about this: try explaining to your boss (or spouse), that even though you (or your project) is now firmly in the red, you were successful because you had a great learning experience. You don’t get to too many places with that “success” except to the classifieds.

So, would you like an inspirational quote for the day, no hard work attached? Here’s one. 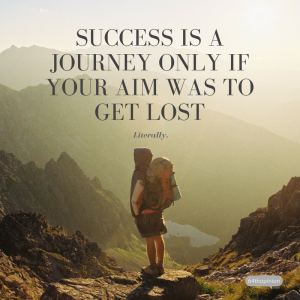 And yes, now you can rage comment all you want. That ought to give this article some success.