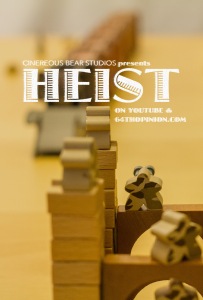 Sometimes I find that genres are very tiring labels.

I mean, I like genre movies. I’m an unabashed fan of sci-fi. And fantasy. And steampunk.

And as a amateur filmmaker, I liked the idea of playing around in these genres.

But in all my (short) years of making stories, if anyone had told me that I would be doing a western, I would have called them crazy.

To be clear: it’s not that I don’t like westerns. It’s just that I have had incredibly few experiences with westerns. To date, I have read one western novella (“All the Flavours” by Ken Liu), one “western” movie (Rango) and part of a western TV show (Firefly). (Also: I read/watched those after I made this film.)

If you’re familiar with any of them, you probably know that none of them are very traditional westerns.

But I think that it allowed me to make stuff up and fiddle as much as I wanted with the genre, and I think it gave me the freedom to explore.

Whatever the case, again, this was a school project, and last I checked, this was still my animation teacher’s favourite film from a student. (He likes westerns, though, so… yeah.) Again, I think that I did a fairly good job given my past experience and such.

If you’re an avid gamer, of course, you might recognise that most of the pieces used in the video are from different games, Colt Express being the main one. The moment I saw the game, I knew already that it would make a great set piece for an animation, and thus, Heist was born.

Well, I hope I didn’t talk your ear off, and I hope you enjoy the short film.

Like Loading…
← Do authors’ opinions on their own books even matter?
→ Boku no Hero Academia review: thoughts and themes