In the 1880s, in an attempt to create a universal language that would ease international communication and encourage global peace, a medical doctor, L. L. Zamenhof, published Unua Libro. In it, he provided an introduction to his invented language, dubbed “Lingvo internacia”.

For his work, he was nominated for the Nobel Peace Prize twelve times. And while he never won, his invented language has had a lasting effect.

Today, “Lingvo internacia”, now called Esperanto, has an estimated 2 million speakers. It has its own Wikipedia with 241,000 articles. Google Translate offers Esperanto as one of its languages. And you can learn it on Duolingo.

But while Esperanto enjoys growing usage today, its beginnings were far from glamorous.

The birth of an idea 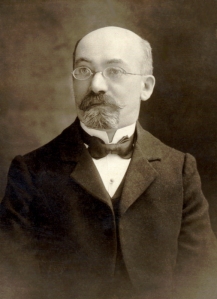 Since young, Ludwik Lejzer Zamenhof, or L.L. Zamenhof, as he became known, dreamt of peace. His hometown of Białystok, in modern-day Poland, was composed of a diverse mix, and there was constant strife between groups.

Zamenhof could have labelled many things as the root of this strife. Culture, race, class. However, to him, the biggest culprit was language. The lack of communication, he believed, promoted misunderstanding, which led to quarrelling.

For Zamenhof, there was only one solution for this: a universal language. It is from this dream that his lifelong work began.

Initially, Zamenhof considered reintroducing Latin, but was discouraged by its complicated structure and difficulty to learn.

This did not dampen his pursuit, and after learning several more languages, he began his work, taking much of his new language’s vocabulary from the Romance and Germanic languages.

But he had numerous setbacks ahead of him—his father, not understanding the purpose of the work and fearful of the Tsarist police, burnt it—and when Zamenhof finally came around to publishing it, the police blocked its publication.

Undaunted, Zamenhof translated the Bible and Shakespeare into Esperanto, further improving the language.

Upon publication, the language spread rapidly, and over the next several years, made its way around the globe. Then it began to pick up high profile supporters. Leo Tolstoy, the celebrated Russian author, tried his hand at writing in Esperanto. And by the 1920s, the language had become popular enough that the young League of Nations considered using Esperanto as their working language.

Except for one problem. The French, fearing that the rise of Esperanto would fuel the decline of French, vetoed the motion in a 10-1 vote.

That did not diminish its growing popularity, and by the middle of the 1920s, the League of Nations recommended that its members offer Esperanto in their respective education systems.

By the 1930s, however, rising autocrats began to suppress the language. They saw it as a language of spies, and feared that a universal language would dilute nationalistic spirit. Hitler, in particular, believed that Esperanto was a Jewish conspiracy (Zamenhof himself was Jew), a tool to be used once they achieved world domination. Many Esperantists were persecuted, deported, and in some cases, killed.

Despite these setbacks, however, the language has grown to over two million speakers today, and in 1999, William Auld, an Esperanto poet, was nominated for the Nobel Prize in Literature.

While Zamenhof’s desired effects of Esperanto on the human race have yet to occur (i.e. world peace), there are many other effects that can be studied.

One of them is linguistic relativity, popularly labelled the “Sapir-Whorf Hypothesis”. Simply put, the idea suggests that the structure of one’s language affects one’s worldview and cognition. However, it has no conclusive evidence proving or disproving it.

In his classic novel Nineteen-Eighty Four, Orwell described a world that spoke Newspeak. Instead of words like good and bad, Newspeak has good and ungood, and instead of worse and worst, they have plus ungood and doubleplus ungood.

The entire purpose of Newspeak, it is revealed, is to restrict human thought. If a language makes it impossible to sound negative (or “unpositive”), then rebels would be unable to express discontent adequately to incite rebellion.

I am in no way suggesting that Esperanto was meant for such a purpose. However, again, relating to the Sapir-Whorf Hypothesis, it might be instructive, in the least, to study how language, either in syntax or vocabulary, can inhibit our thinking. A constructed language might provide an easier basis to study that.

Whatever the case is, I wouldn’t recommend using either Klingon or Dothraki as test languages.

Science fiction author, artist, animator. I blog mostly for fun but wouldn’t mind getting money for it (donations are welcome except I don’t have anywhere to donate to, so yeah.) Also a board game designer. View more posts