Disney has done it again.

There’s one thing they missed out, however. They missed the chance to tell an original story.

If you didn’t already figure out which movie I was talking about, yes, it’s Moana. (Or maybe its The Force Awakens. Except that isn’t a princess movie. Oh, wait. There’s Princess Leia. Never mind.) Yes, Moana had some “new” elements, but, all in all, the movie is just another basic princess movie masquerading in a new HD skin.

Since the 1930s, Disney has been trying, working tirelessly, to create the perfect princess movie. And it’s gone through a lot of changes. But here we are still, eighty years and some fifteen or more films later, and it looks like Disney’s getting close. Or maybe they’ve already succeeded.

And before you say anything else, let’s be honest: Disney’s only markers for a good film are the profit margins, so a perfect movie for them is one that makes them rich beyond belief.

Don’t believe me when I say that the princess movies are essentially the same? Well, here’s a chart to prove it. 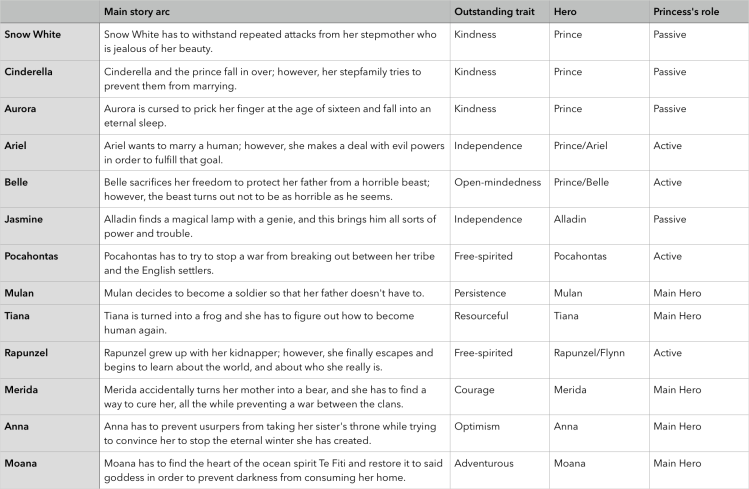 If you’re looking for a unifying feature in each of those, most of the princesses spent their early lives locked up by either an evil stepmother, an overbearing father, or, in Belle’s case, three weird aunts.

As you can see, while the evolution has been slow, there’s an identifiable trend. We’ve gone from women looking for romantic love to women who are trying to save the world. We’ve gone from paragons of “kindness and purity” to courageous and adventurous heroes, ready to take on the world. And we’ve gone from the passive Snow White to the heroic Moana.

There’s no problem with the princesses becoming more heroic. The problem arises after Disney makes ten movies about it. Then it gets kind of repetitive. And I don’t know about you, but when I go to watch a movie, I don’t plan on watching the same plot prancing around in a different skin. Ten times.

Funny how we reward Disney for being repetitive while we punish Apple, right?

To be clear: for the most part (Frozen aside), I don’t think that the princess movies are insults to entertainment. However, I think that, in the light of the billions of dollars Disney has, they could’ve come up with something a lot better. And a lot more original. Better movies were made with far smaller budgets.

Considering that Disney is a multi-billion dollar enterprise, they could’ve come up with something a lot better than yet another princess movie.

Here’s another example from an Oscar-winning movie: A Beautiful Mind.

If you didn’t watch or can’t remember the film, it’s basically the story of the Nobel Prize Winner in Economics, John Nash. Throughout the early parts of the film, Nash wanders around and skips classes, looking for his “great original idea”, one that would put him in the history books and make him great. He scoffs at his friends who are content to work in known fields and content to let their chance to be great slip by.

Disney, I am sad to say, is kind of like Nash’s friends, content just to be tenured, not interested in being great. For the last decade, they’ve played in the safe waters, and while it sure has been financially rewarding, it hasn’t by any means broken any ground.

But guess what? Like Nash and his friends in A Beautiful Mind, history, or really, future movie watchers, will be the judge of how great the repetitive Disney movies are. Not many know the names of Nash’s colleagues (unless you were in that field or maybe watched the film). Maybe these repetitive films will blow over, and leave only the great films of our generation.

Or, of course, the other option is that the millions of plastic figurines from Disney movies could outlast the great movies that don’t have toys related to them, and the next generation (well, my generation) will be forced to watch reruns of The Little Mermaid and Moana for the rest of our lives.